The concert film by Concerto Budapest and Imre Szabó Stein wins the Golden Lion at Venice TV Festival. This success is the success of the entire orchestra.

The two-hour-long, remarkable concert film that debuted on MEZZO TV in May came out winner with a winged Golden Lion in the Performing Arts category at the Venice TV Festival - VENICE TV AWARDS 2020, the television companion to the Venice International Film Festival.

The film of Concerto Budapest Symphony Orchestra & Kremerata Baltica, hallmarked by András Keller and Gidon Kremer and directed by Imre Szabó Stein, could be watched online in May by about 220,000 Hungarian viewers with the special authorization of MEZZO TV, before being broadcast on the most important international music TV programme. The project is a huge success for Concerto Budapest: it is to the credit of Dr. Péter Edvi, CEO, and András Keller, artistic director, that they gave the go-ahead to the project entailing significant work, and that the back office areas supporting the orchestra carried out highly coordinated work in the fields of licensing, administration and arrangements.

This year, television productions submitted to the Venice TV Festival from around the world competed in 16 categories, with just a single winner in each category. The status of the festival and the competition is clearly evident in that, for example, in the Best TV Series category, a Golden Lion went to The New Pope directed by Paolo Sorrentino and starring Jude Law made in a Sky, HBO and Canal+ coproduction. As outright winner in the Performing Arts category, the concert film by András Keller and Imre Szabó Stein was up against, for example, a BBC work on the Camden Festival, the opera film Les Indes Galantes made in a coproduction of ARTE and MEZZO, as well as Deutsche Welle’s Night Grooves music talk show featuring Kiefer Sutherland and Madeline Juno.

The film is of a concert brought about with the unprecedented collaboration of Concerto Budapest and Kremerata Baltica, staged in Müpa Budapest on 4 December 2019. In addition to the usual television broadcasting techniques of traditional concert recordings, a separate film crew also took part in making the two-orchestra, two-hour-long film starring András Keller and Gidon Kremer. The span of this immense musical undertaking ran from the Adagietto movement of Mahler’s Symphony No. 5 in an arrangement for string orchestra by Gidon Kremer through the Chaconne opus of the Partita No. 2 in D minor by J.S. Bach-Busoni and Schnittke’s rarely performed, complex masterpiece, the Violin Concerto No. 3, to Weinberg’s shocking and revelatory Symphony No. 21 (Kaddish), a premiere in Hungary. 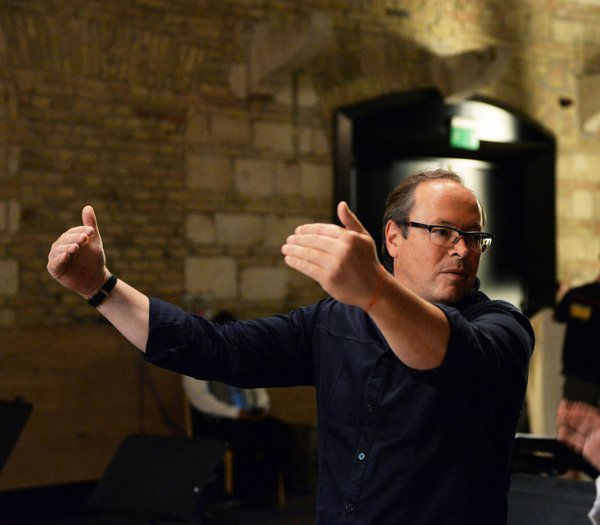 Imre Szabó Stein: “I was genuinely surprised at the news of the win, I thought that alongside musical super-productions from the world's top broadcasters it would be almost impossible to stand out at the Venice Festival, the most important television competition in Europe and one of the most important in the world. This is now an enormous Hungarian music and film music triumph in one. Classical music likes to hide itself away, so if we are able to open this magical treasure chest using cinematic tools and recreate the miracle with cinematic tools, it is validation to me personally that it is worth working and creating boldly, and pushing the boundaries. As far as I am concerned, the lesson is that a quality cinematic music recording is capable of reaching more people – by orders of magnitude – around the world and can help create a new audience for classical music. Naturally, without the penetrating force of conducting by András Keller, the brilliant violin skills of Gidon Kremer and the spirit of Concerto Budapest, the picture would have remained blank. We worked on two concerts recorded live on one day. In addition to the Müpa Budapest 8-camera TV recording team I called in a 4-camera film unit, and instead of the typical, traditional, descriptive material used for concert recordings, we wanted to bring about a much bolder, more cinematic result utilizing a lot more cuts revealing the movement, birth and flow of music. It was unusual and a great honour that MEZZO commissioned an outsider, in my person, with directing the film.”

Concerto Budapest, led by András Keller for the past 13 years, debuted on MEZZO TV with this concert recording. Previously, only Keller Quartet and Budapest Festival Orchestra from among the Hungarian orchestras performed regularly on the station. Imre Szabó Stein has already won numerous prestigious international awards as writer and director of music image films, including two Silver Hugos at the Chicago International Film Festival, the Cannes TV Awards Silver Dolphin, Red Dot Award, and the prize for Best TV Series at the Los Angeles Film Awards.